July 20th marked the end of my four pannier setup, and the beginning of my first major detour since Alberta. My traversal of The Great Lakes continues to produce impressive coastline views and unexpected vast farmland. And while I can’t say I expected to look north and see the USA during this trip, I have done just that.

During a necessary rest day on Monday, I met a couple more cyclists camping at Velorution bike shop. Mike from Edmonton, Eastbound across Canada via Manitoulin like me but at a slower pace. Ethan from Connecticut, Eastbound on a relatively short circle tour starting and ending at home. Pretty neat to share routines and compare gear!

So I set out early Tuesday, aiming for a long day with an eye on Southern Ontario. For the third time since entering Ontario, I was surrounded by acres of farmland. At this point I’m convinced Ontario should be classified as a prairie province.

East of the Sault, the Lake Huron North Channel trail weaves its way around the Trans Canada Highway, and the two are often parallel. So I alternated, trying to stay close to the lake and on pavement.

We camped together and rode through Espanola to Manitoulin Island, enjoying a dip in a small lake on the way to neutralize the humidity. We agreed being soaked in lake water was much preferred over our own sweat.

We explored Little Current a bit, admiring the rotating bridge before splitting as I pushed on towards the South Baymouth ferry terminal.

I had about 20km of riding, arriving early enough for the 9:10am sailing to cook quinoa and make wraps for lunch.

The nearly two hour ferry ride provided an opportunity to charge up my powerbanks, do some writing and shopping, and re-organize my gear in preparation to mail home both front panniers.

First stop on arrival in Tobermory was the post office. One empty front pannier and another full mostly from clothes weighed in at ten pounds. I suppose this cycling diet is working – I’ve never heard of a diet shedding ten pounds in one day! 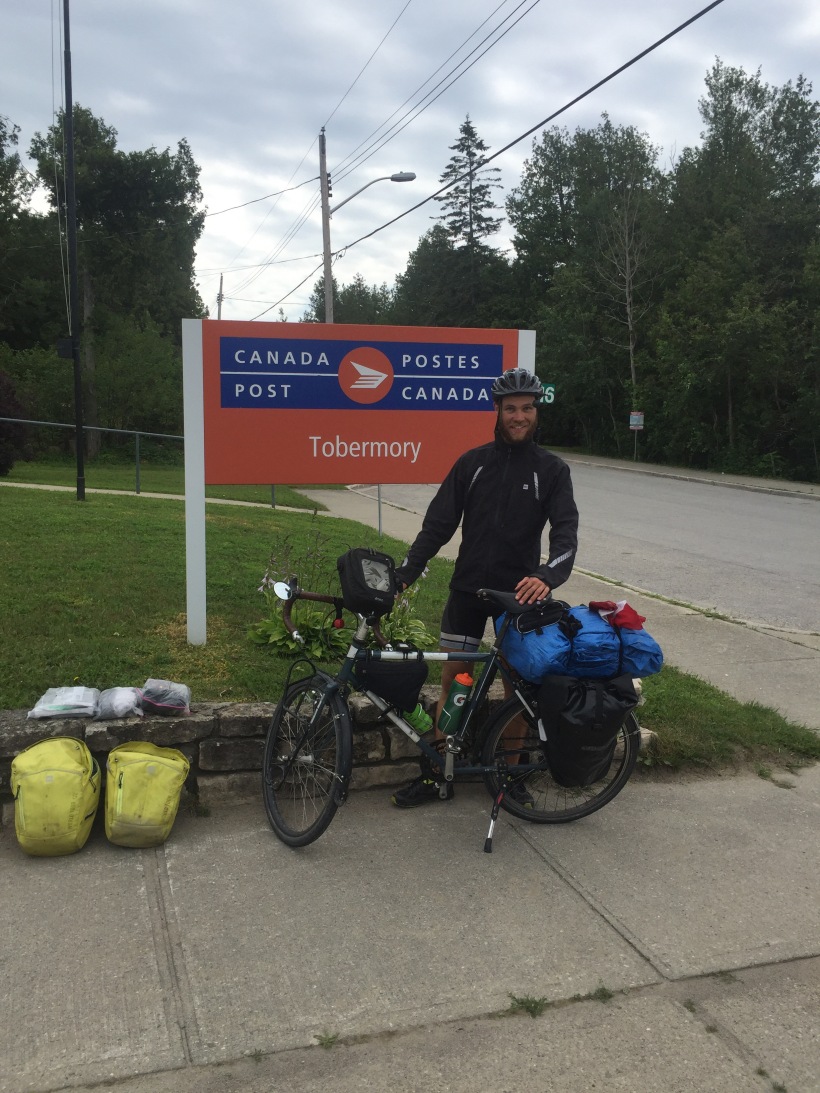 I then progressed to Bruce Peninsula National Park, hiking to the Grotto, a huge cave and a main attraction of the area.

All hiked out, I pedalled through some nice quiet side roads along the Bruce Peninsula’s west coast, having some photography fun inspired by a stunning sunset before finding a great little park to camp at in Pike Bay.

Friday I continued hugging the Huron coast, enjoying quite a scenic stretch around Sauble Beach and finding a national historic site.

The instant I drifted away from the coast, I was back in farmland, mostly corn fields. 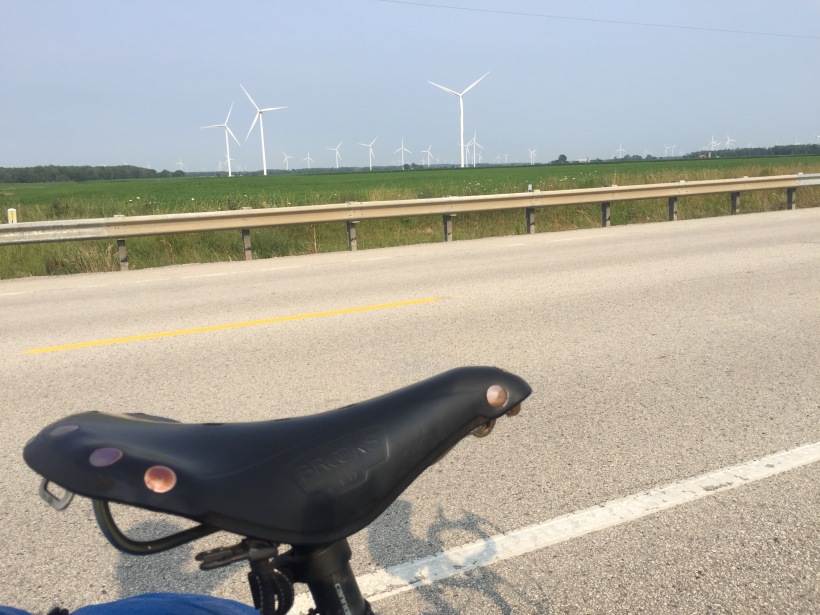 Those familiar with southern Ontario’s geography are no doubt wondering what carried me on this huge detour down to Windsor.

It was a combination of having relatives in Windsor, wanting to see the most southern point in mainland Canada, and other relatives’ schedules lining up such that I had time to circle Southern Ontario. Essentially I was faced with two options: continue through and miss most relatives I was hoping to visit, or take my time and see them all (hopefully!) while doing more sightseeing along the way.

So after arriving at their home on Sunday, I was rewarded with a rest day: A Point Pelee afternoon and exploring Windsor with Cousin Once Removed Maureen, Husband Tony, and Second Cousin Courtney. I can also say I’ve seen Detroit, since it’s right across the Detroit River. Next up, stops in London, Hamilton, Toronto, Picton, and Ottawa. The great thing about relatives is the further you reach along the family tree, the more people you find!