After not meeting another cross-Canada cyclist in my first sixty-six days, I’ve met over a dozen in under two weeks. Sault Ste. Marie is a destination for nearly all of us, and the Trans-Canada Highway which I’ve followed almost exclusively through Ontario is littered with us.

Lake Superior is big. How big, you ask? Allow me to paint a picture for you. In my six cycling days near its north coast from Thunder Bay to Sault Ste. Marie, I’ve covered about half of its coastline. Looking into its endless waters, it appears no different than the ocean. It covers roughly the same surface area as South Carolina or Austria. Its volume is greater than the other four Great Lakes combined. Lake Superior is big.

After my first glimpses of the world’s largest freshwater lake by surface area and resting Monday in Thunder Bay, I began the hilly trek and made it to Nipigon Tuesday night, where I met John.

He’s carrying a tent and the bare essentials, eating only fast food while cycling from Victoria to St. John’s and back in just over two months. While writing this post, his worldwide rank on Strava for total cycling distance in July is 2. Mine is 23,619. After we camped together in Nipigon, he reached further in one day than I did in three. Any time I question my sanity, I just have to think of John. Thank you John!

I had a rough few days for electronics. My iPod appears to be toast from water damage, and my powerbank and Garmin cycling computer were stolen after I plugged in outside a gas station while using the washroom and filling up on water. Quite a few dollars down the drain, but I see a blessing in disguise in all three. With both ears free, I’ve paid extra attention to the heavy Trans Canada traffic and enjoyed some good group cycling conversation (keep reading!). I immediately found two smaller, lighter powerbanks at Canadian Tire on sale for $10, which have been more than enough since. And my Strava followers will be thrilled that I’m now using Strava on my phone while riding instead of my Garmin, enabling me to upload rides to Strava nightly and surprisingly not chewing up much battery life.

So I continued the long, hilly stretch for a couple days, which featured a long reading break on Terrace Bay beach and a lengthy detour into Pukaskwa National Park – 15km each way, but well worth it! 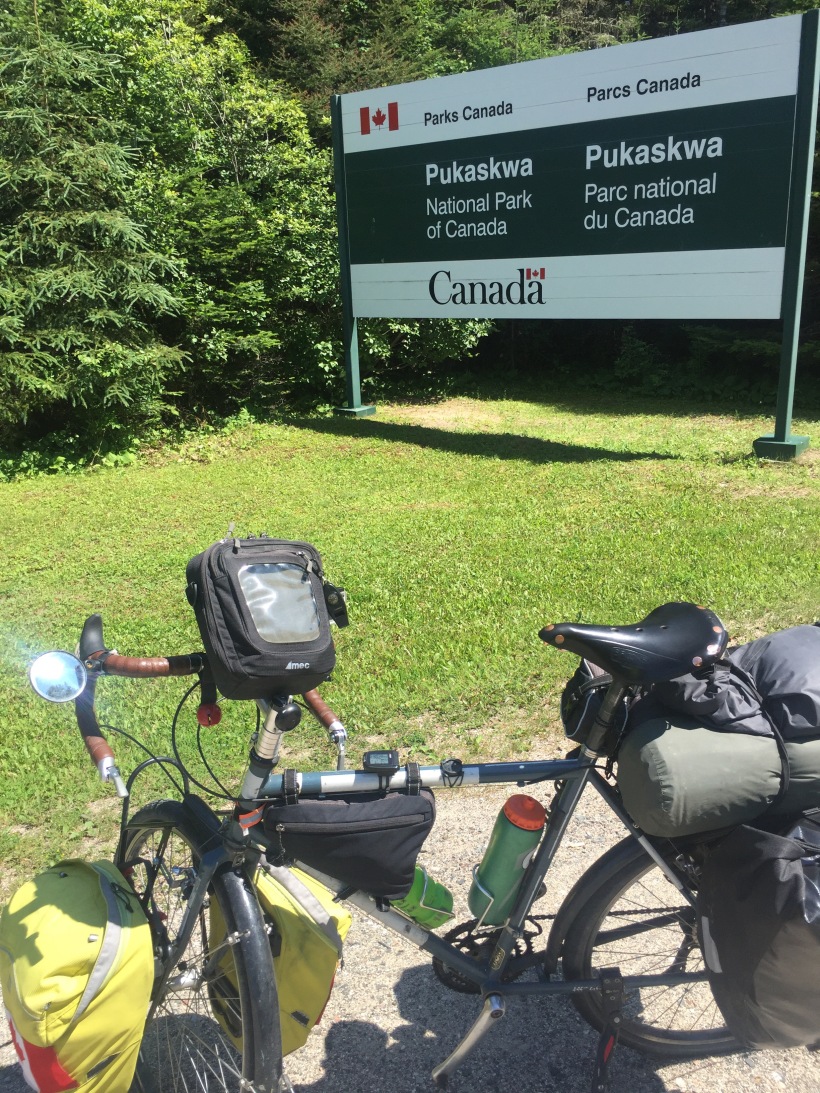 Friday I met a group of four cyclists, which I joined for two nights, giving me a taste of group riding. Quite different than being alone – when you clip in, you really are clipped in since taking an extra break means falling behind, as I found on multiple occasions! All of us cycling different flavours of the Pacific to the Atlantic. Katie and Jodi doing the whole thing together, Brian and Mike both solo and joined them on the road. So we shared a campsite at White Lake Friday night and squeezed all five of us plus all bikes and gear into a Wawa motel room Saturday night.

Inspired by lighter travellers, I produced a large ziploc bag of garbage on Saturday night mostly full of bike supplies and extra parts I hadn’t touched all trip. Mike called it my cycling diet – lost about five pounds in one night, not too shabby!

From Wawa the girls veered East targeting Timmins, while the guys continued South, pushing for a long day into Sault Ste. Marie, AKA The Sault. I fell behind midday, insisting on sightseeing while Brian and Mike pedalled on. I detoured about 1.5km each way to check out the Agawa Rock pictographs, featuring paintings centuries old on rock faces right on the lake.

The scenic stretch featured some impressive views of the lake, where I stopped to admire but apparently Brian and Mike didn’t for the most part.

Our destination was Velorution, a bike shop in The Sault with free camping space and facilities for cyclists! Brian and Mike made super time and arrived before 8, while I huffed in around 9:30. Just in time to pitch my tent and enjoy a glorious cold dinner of beef jerky, pasta sauce, hemp seeds, and onions. There were eight of us camping behind the shop, managing to share one washroom while exchanging stories and advice. 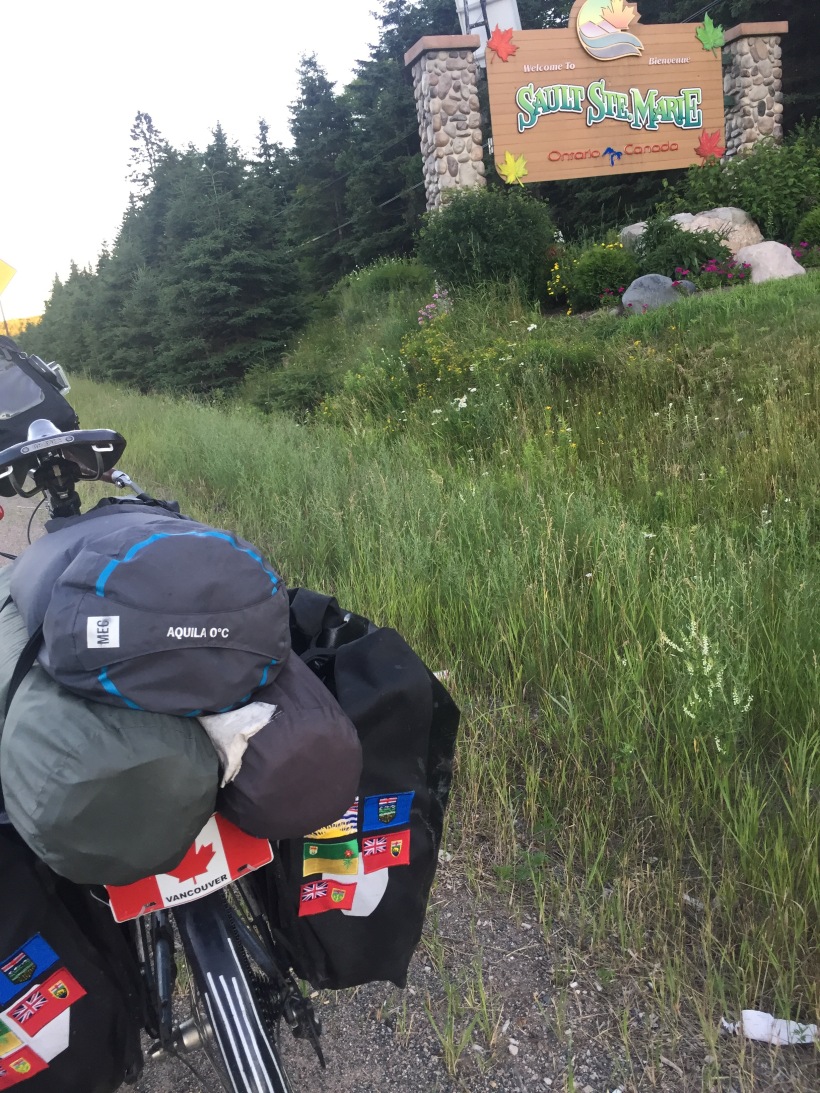 Brian and Mike bounced back onto the road  Monday morning, gunning to reach Sudbury in two days while I stuck around The Sault to recover from our 230km hilly day, run errands, and blog.

Other cyclists I met on the road or at Velorution during this stretch: Cooper from Australia, Eastbound around my pace and cycling across Canada before staying here on a work visa. Michele and Justan, enjoying sightseeing as she cycles Westbound while he juggles support  vehicle duties and working online via laptop. Andy from Ireland, Westbound and raising suicide awareness while seeing the country. A guy from Germany, Westbound to avoid starting with the Rockies and visiting some family on the way. Two guys Westbound, interviewing people doing alternative celebrations of Canada 150. Melanie from Niagara Falls, Eastbound, taking it slow, and enjoying a travelling break after completing grad school. A guy with very minimal gear, Westbound and pedalling for about eighteen hours daily to cover more ground and often riding at night to stay warm. There are many different flavours of cycle touring!

I’m ridin’ solo once again, finally saying goodbye to Lake Superior and continuing East before turning South to Manitoulin Island and Tobermory. Looking forward to a barrage of family and friend visits in southern Ontario!
July 11th: 110km, Thunder Bay to Nipigon. No map as the ride was only on my Garmin 😦

4 thoughts on “July 11th-16th: A Superior Week, Lightening Up, and Cyclists Galore!”