Apologies that some photos might not turn out well or at all, the WordPress app and/or wifi are a bit moody today. Will fix later if possible!

Much flip-flopping and planning in Cranbrook led me East rather than North. This post was composed from within the boundaries of my first national park. Not Banff, but Waterton!

May 20th started with a 2-hour pit stop, but was my favourite day of riding so far once I got going.

My set up outside a Crawford Bay gas station.

Stopped at a gas station to pump up my front tire, I did the exact same thing I’d done the previous day on my rear tire, tearing a hole where the valve meets the tube.

After being stalled for hours by making the same mistake twice, the silver lining was my bike was SO ready to chew up some kilometres. Bright and sunny Saturday was a dream ride, straight down the East coast of Kootenay Lake in to Creston.

Was listening to Metric when I reached this sign. Had to juggle the tunes.

One of many mirror image views of the mountains across Kootenay Lake.

Pedalling into Creston, I found a secluded public grassy spot near the railroad tracks to pitch my tent.

The next morning I got an early start, rotating the pedals on the Crowsnest Highway before 7 – since Creston is near the edge of the Pacific time zone, the sun rises early!

This helped me reach Cranbrook around 4:30 Mountain Time for some shopping.

My, how time flies! May 21st, my first of five anticipated sub-24-hour days.

Cranbrook’s Superstore parking lot provided yet another funny/bizarre/fortunate encounter, which seem to be quite frequent! Packing up my groceries, I got talking with a regular man passing by and mentioned I didn’t know where I’d camp that night and would find a grassy spot for my tent along the way like usual. Almost immediately he explained he works for a helicopter company, offering me the access code for their office at the airport just outside Cranbrook to stay the night! Quite the treat to be inside, re-organize, and recharge the gadgets!

Speaking of re-organizing… That night yielded my first change of heart. 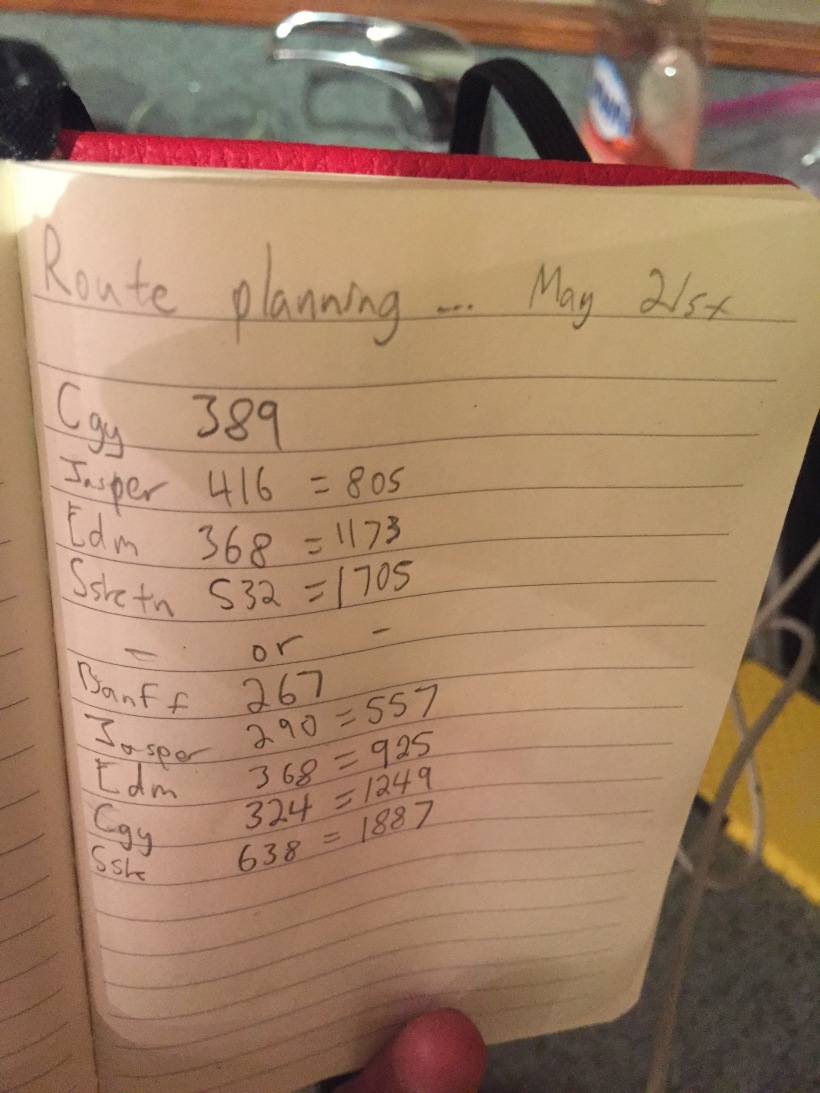 Notes from intense planning in Cranbrook.

I was convinced Waterton Park was worth the detour, and since I plan on hitting Saskatoon, the most logical route from Cranbrook became Waterton-Calgary-Banff-Jasper-Edmonton-Saskatoon.

So instead of continuing towards Kimberley, I followed the Crowsnest to Fernie. 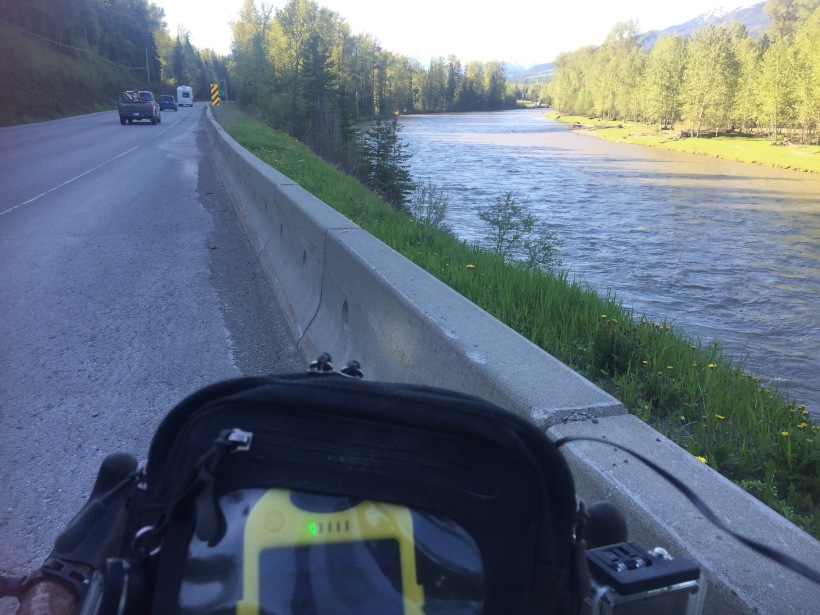 May 23rd was a long, eventful pedal across the provincial border. I saw the world’s largest truck, Frank Slide museum, and my first taste of Alberta, all in one day!

Why does the world’s largest truck live in Sparwood, BC, when Alberta is right next door? …

Thinking about swapping my bike for this truck.

Result of the mountain face from the 1903 Frank Slide that claimed 90 lives.

Panorama outside the Frank Slide Museum. 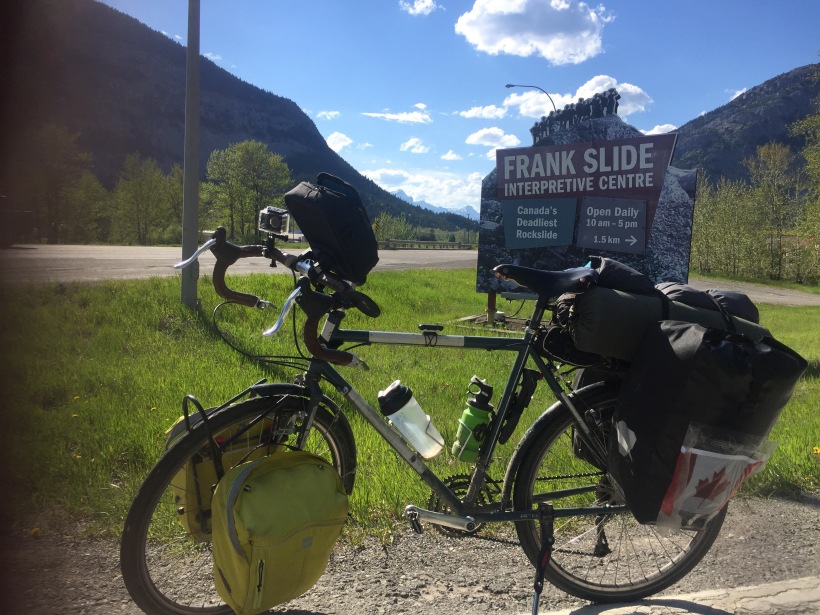 Alberta has some scenery too!

I knocked off as many kilometres as I could, setting up my tent beside the highway near Pincher Creek knowing the next couple days would bring some combination of wind, rain, and thunderstorms.

Good thing I got pretty close to Waterton too – Tuesday night extreme Eastbound prairie winds rolled in. On Wednesday, through a combination of pedalling and pushing in order to not get blown over by crosswinds, I ventured the  40km stretch South to Waterton.
I’d been pushing for about half an hour, struggling just to stay standing in the process, when an SUV and U-Haul trailer pulled over in front me about 5km from the park entrance. Cathy Jenkins, a sculptor delivering her works to the art gallery in Waterton, from Vancouver too oddly enough! Seeing me battling the gusts, she helped me toss my bike into her trailer and gave me a lift into the park. I found out she was looking for manpower to lift her works into the art gallery, so I ended up helping out for a couple hours. We laughed about the mutually beneficial situation, asking each other “What would I have done without you!?”

Later that afternoon I met up with my Waterton hosts and personal parks experts. “Sister Of Friend” Anna and “Friend And Roommate Of Sister Of Friend” Natalie, both staying in Parks Canada staff housing to work there for the summer.

That evening we drove to Red Rock Canyon, a drive where I quadrupled my “bear sightings” count by spotting three separate black bears – one black, one brown, and one blonde! 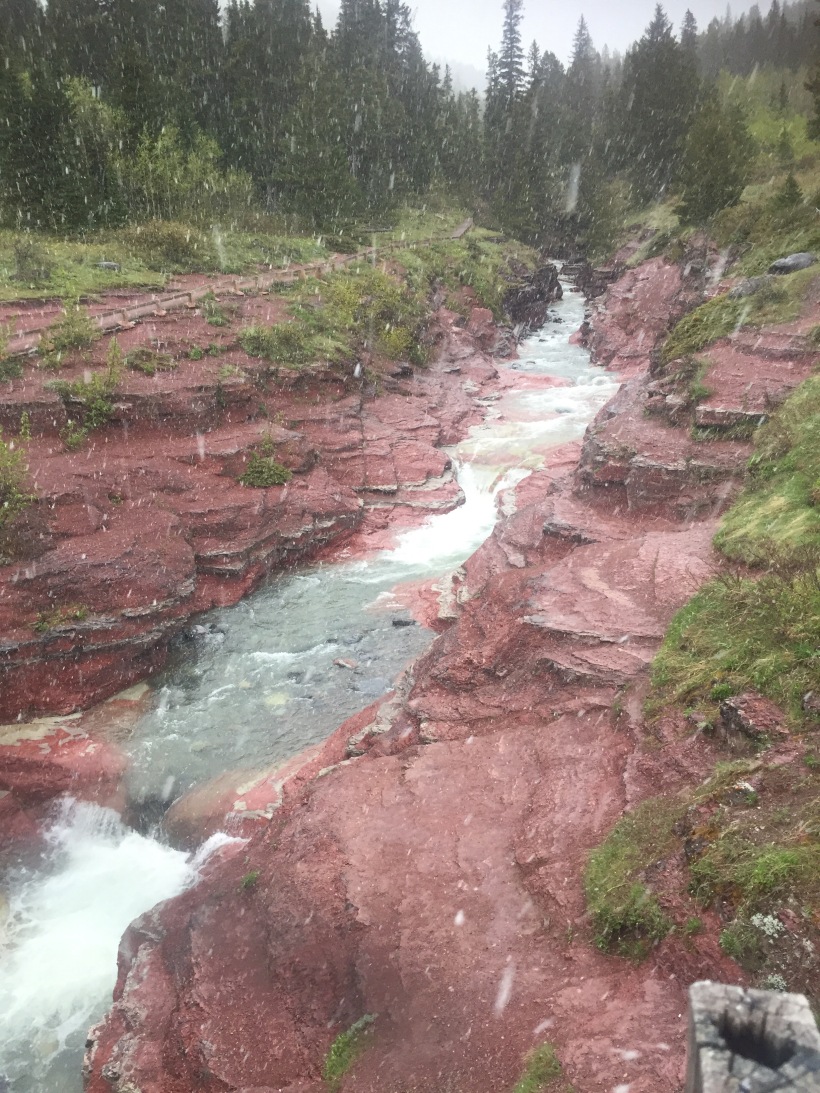 Red Rock Canyon: A canyon with red rock.
The next morning before work Anna walked me to the Prince Of Wales hotel, quite the viewpoint. 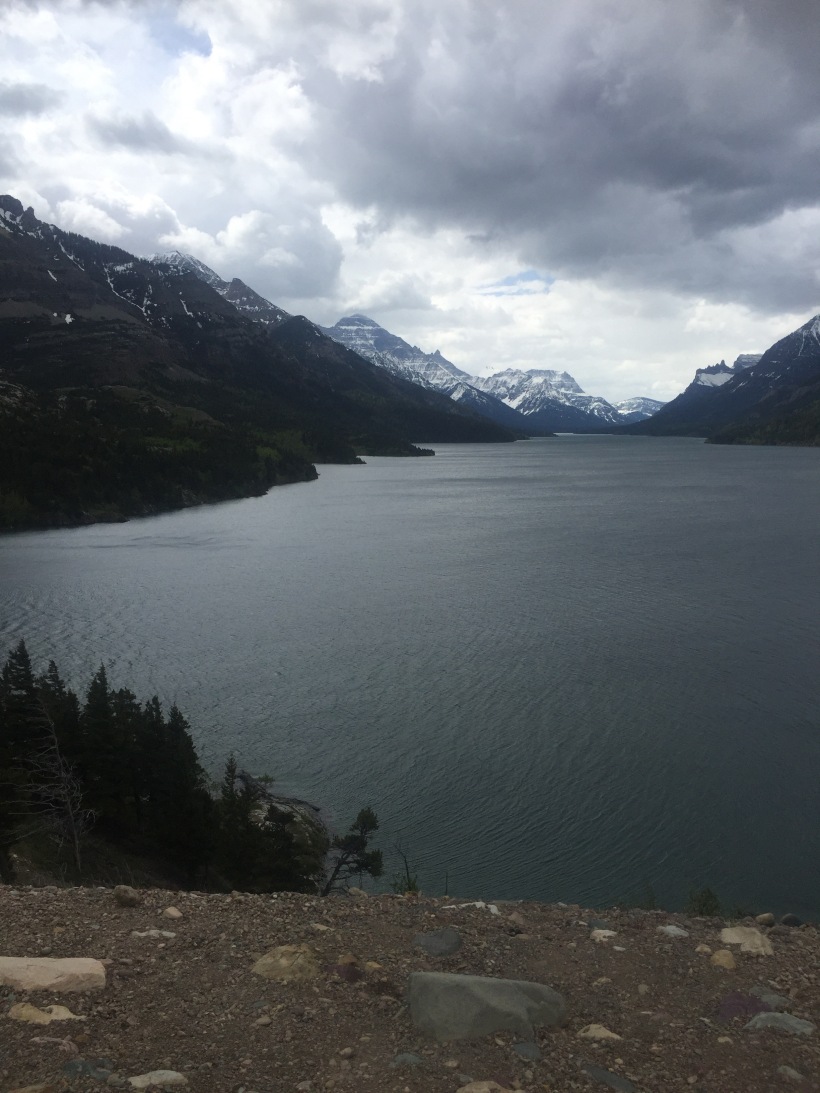 I then took a mini-hike up Bear Hump to find more classic Waterton views. 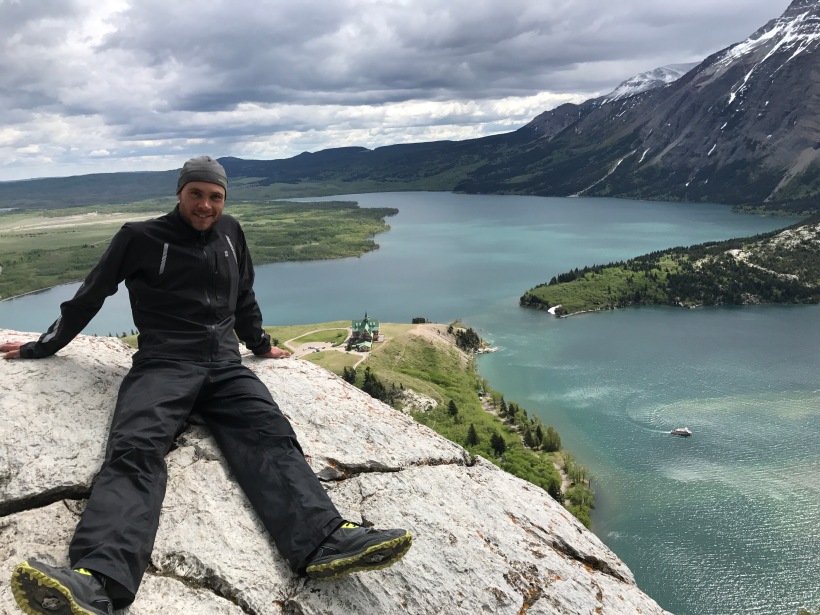 Waterton Park also has a Cameron Lake! I didn’t go, but did take the obligatory sign selfie.

So I set off towards my next destination of Calgary on a less windy but more rainy day than the last – a trade-off I gladly accepted! 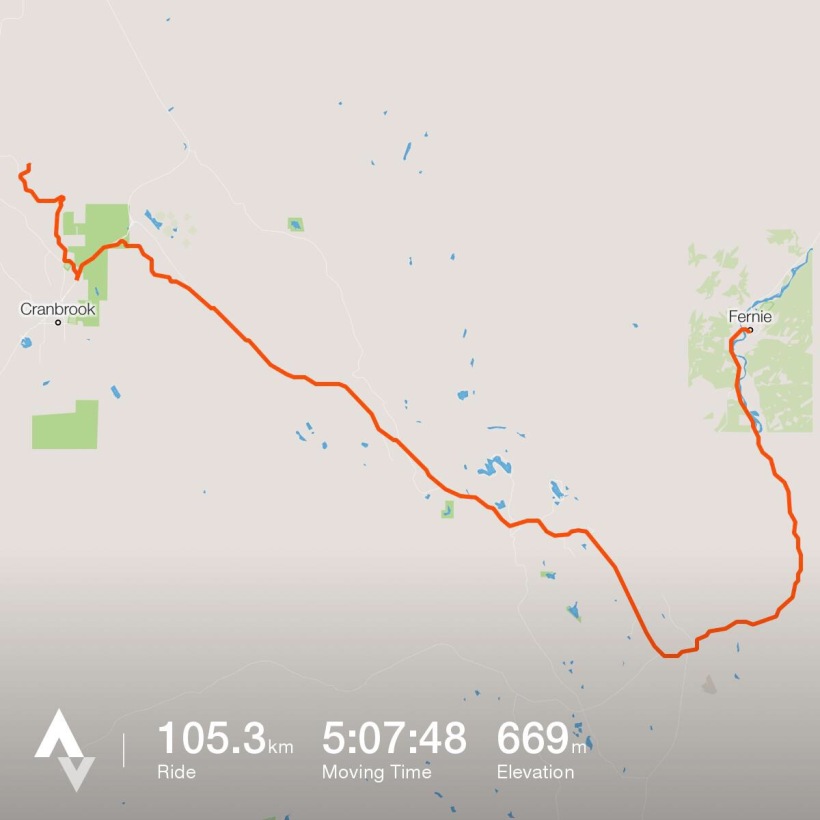 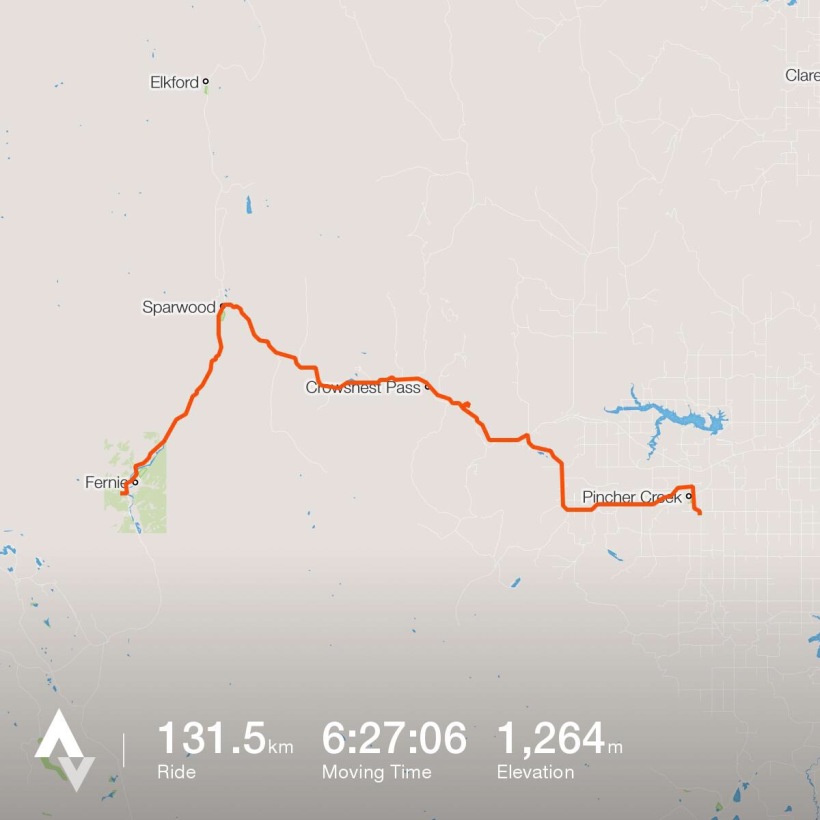