Arriving at the North Sydney ferry terminal on Monday, I did not connect with the 16-hour ferry to Argentia as I’d hoped. That left me with two options: Occupy myself for two days before hopping on the Wednesday night ferry to Argentia, or hop on the “short” 7-hour ferry that night to Port-aux-Basques and begin my final mission to cross Newfoundland over three days.

So with a bus on the other side to fall back on, I became quite sociable bound for Port-aux-Basques in hopes a new friend would haul my Surly and I across The Rock. While several wanted to help, some didn’t have room and the truckers regretfully weren’t allowed to take passengers. So I stocked up on premade sandwiches and snacks, ready to see most of Newfoundland via bus!

Hopping off in Whitbourne Tuesday night, ahead was a day of riding to St. John’s and a final rest day before my Friday flight.
I’d hoped to ride Newfoundland’s T’Railway trail, but it was far from ideal for cycling after the island had absorbed enough water to drown an Atlantic cod over the past few days.

Like all of Newfoundland, it was rocky and bushy with many ponds and some long, gradual hills.

I completed the leg on an overcast, mildly rainy Wednesday, hitting my final destination city with a warm mattress awaiting at its Hostelling International.

The locals informed me my rest day was the first in recent memory featuring blue sky – at least I think that’s what they were saying… Quite the struggle to pick up the somewhat Irish sounding accent. I took full advantage of the gorgeous day. First stop was Quidi Vidi village for a short hike on the Sugarloaf trail to discover vast viewpoints of the Atlantic Ocean and St. John’s. 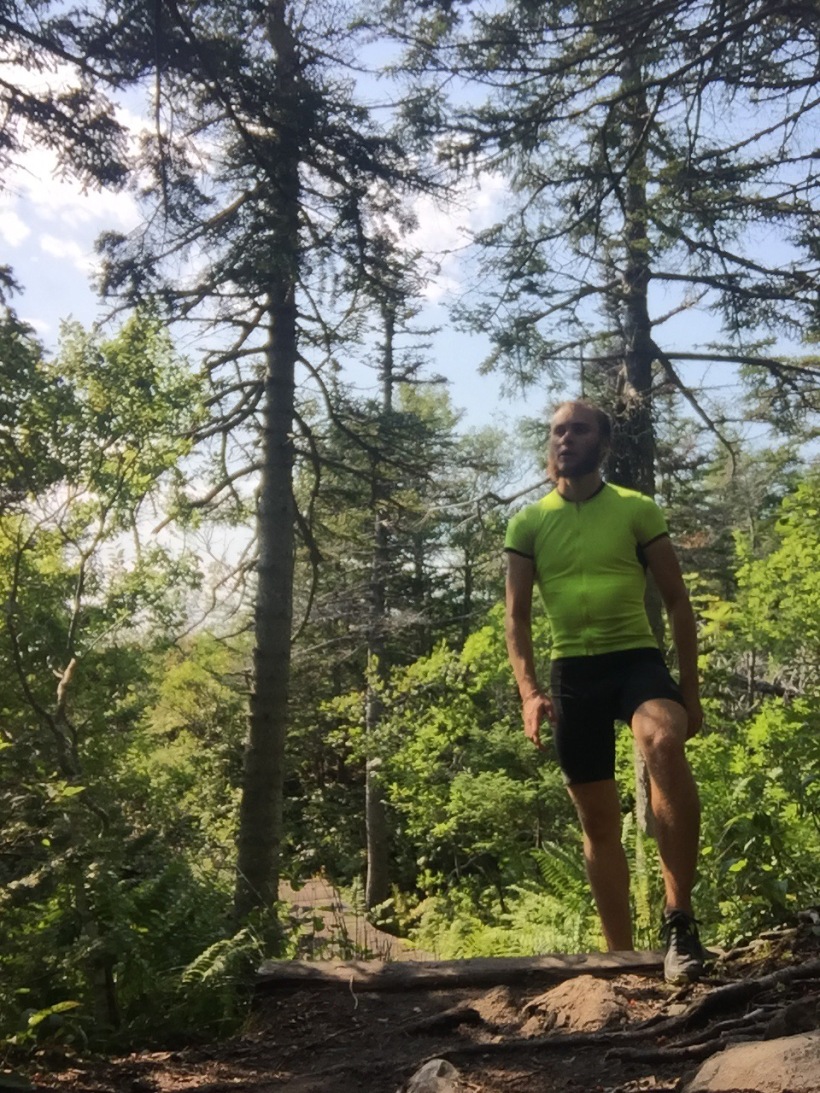 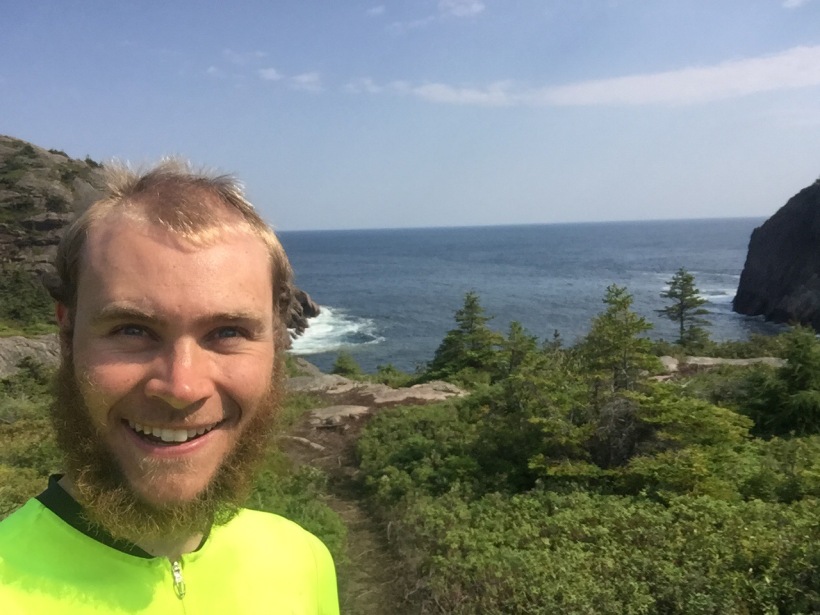 I found similar views, with a touch of history, at Signal Hill. 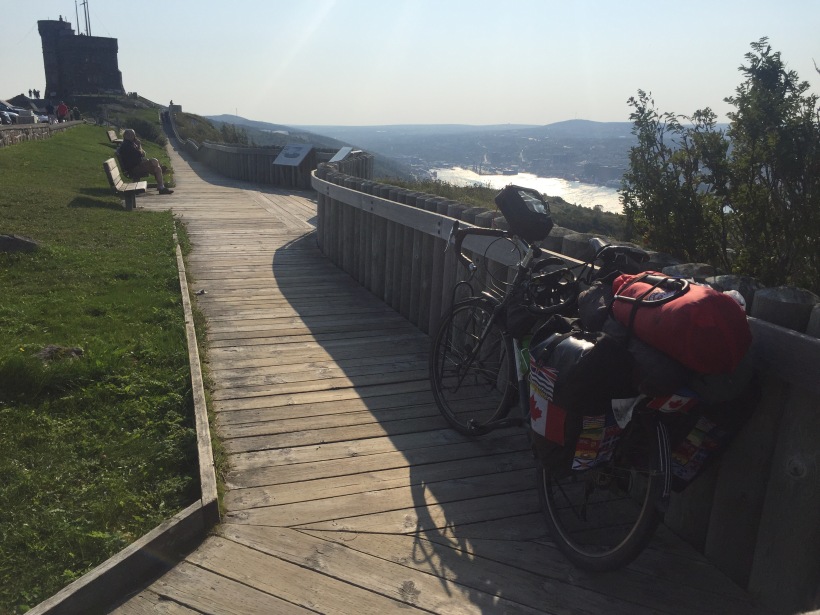 As dusk approached, it became time to make my way to the Cape Spear Lighthouse, the most Eastern point in North America. From the moment I’d booked my return flight, anticipation mounted: September 14th, camp at Cape Spear. September 15th, watch the sun rise over the endless Atlantic, signifying the beginning of my post-cycling-Canada era. And that I did.

Friday I had one final task to complete the feat: dip my front tire in the Atlantic!

Despite crafting 176 nourishment-packed tortilla shells between Vancouver and St. John’s, the contents of my final wrap were not of the edible variety. Wrapping up my bike at the airport was a mini-adventure in itself. One last kind stranger, who turned out to be from BC too, helped hold my bike as I duct taped and then duct taped some more.

After banking five sub-24-hour days along the way, I made it all back in one. From Cape Spear Lighthouse to Vancouver International Airport, September 15th sure was a long day… 28.5 hours to be exact!

Just as the vigorous Atlantic waves I’d witnessed that morning crashing into the sturdy Cape Spear shores, my prodigious pilgrimage came to an abrupt halt.

It’s difficult to find words to summarize this life-changing journey. It’s been everything I’d hoped for, and more, in every aspect. My day one motives have remained unchanged, and have really come to life along this eastbound expedition. I’ve experienced the ultimate freedom of travelling alone with a loose or non-existent schedule and taking each day as it comes. I’ve absorbed the country’s diverse natural beauty from coast to coast. I’ve embraced the precious opportunity to connect and reconnect with family and friends. I’ve encountered the open arms of strangers and been showered with immense kindness throughout. I’ve sustained a contrasting lifestyle, realizing how straightforward it is to achieve ultimate blissfulness with minimal possessions.

Keeping this blog has been time-consuming, but well worth every second. It’s been a fantastic channel of connection, making me feel far from lonely despite being physically alone. It’s shed light on the writer in me I never thought existed.

So I’ll be returning to many endeavours at home, one of which will be writing a book. It will contain highlights of my blog, as well as some additional thoughts cycling through my mind while on the road. Some inspiration will spawn from my personal journal, which I’ve occasionally made ink deposits in along the way.

This will be a joint venture with the Canadian Mental Health Association as a fundraiser for their depression and anxiety initiatives. While I consider myself mentally healthy, it’s a great cause that really hits home for me. I see much room for improvement and potential for a “ripple effect” as society becomes more educated and receptive toward those suffering.

As for the blog, sadly this is the last post of my cycling adventures. If you haven’t yet, I suggest checking out my final “By The Numbers” page for a snapshot of my trip, where I’ve also added a map of my route. Thank you for all your love and support – through the tough times it was often the people who kept me driving forward. Perhaps the next visit I had to look forward to, and frequently those following my journey and rooting for me.

Remain subscribed to receive major updates on my ongoing book project with the CMHA. With still many details to be sorted, I expect I’ll complete writing late in 2017 and the book will be available in early-mid 2018.

14 thoughts on “Sept﻿ember 12th-15th: A Bittersweet Easterly Ending… And a book!”