This Ontario stretch packed with visits is coming to an end. While I will be connecting with more family and friends going forward, those I’d anticipated when leaving Vancouver are now complete. It’s been another laid back week full of much socializing and minimal pedalling.

A lazy blogging Monday was followed by a burger-and-fries date with University Friend Omar, which progressed to apple crumble and a walking tour of the University of Toronto and surroundings. We walked a lot, and… May have managed to burn off a small portion of what we’d just eaten?

For the afternoon I reunited with Banff Hiking Buddy Natalie, who I’d met at Johnston Canyon in early June. She joined me on bicycle to show off her city. Toronto Island, which we cycled around and enjoyed the beaches before joining the rush back to the ferries as the heavens opened wide.

St. Lawrence Market, where I of course refused to buy anything not edible but did find a rich creme brûlée.
The Distillery District, a very brick-heavy strip where the Mill Street brewery provided free samples.
Nathan Philips Square – the site of City Hall, and more importantly the big letters that will forever prove I really was in Toronto.

I spent most of Wednesday with Cousin Brione and Cousins Once Removed Nathaniel and Isaac, fresh off the plane back from Vancouver.
After a whopping four rest days in Toronto, I returned to my abnormal lifestyle on Thursday, meeting an inspiring cycle tourist on my way out of town.


Holger initially left his native Germany for a short trip to Iran, but never looked back. He’d been on the road for most of three years, covering much of Europe, Asia, and North America so far. I had to ask how he affords it. His smile widened, which I’d expected was impossible. “I live very cheaply. $10/day or so for food, mostly oatmeal and pasta. I rarely pay for accommodation. The cheaper I live, the longer I can do this!”
As things have been going, my next destination was not more than a couple days of riding away. I enjoyed the Waterfront Trail close to Lake Ontario, a mix of paved bike paths, quiet residential streets, and secondary highway. 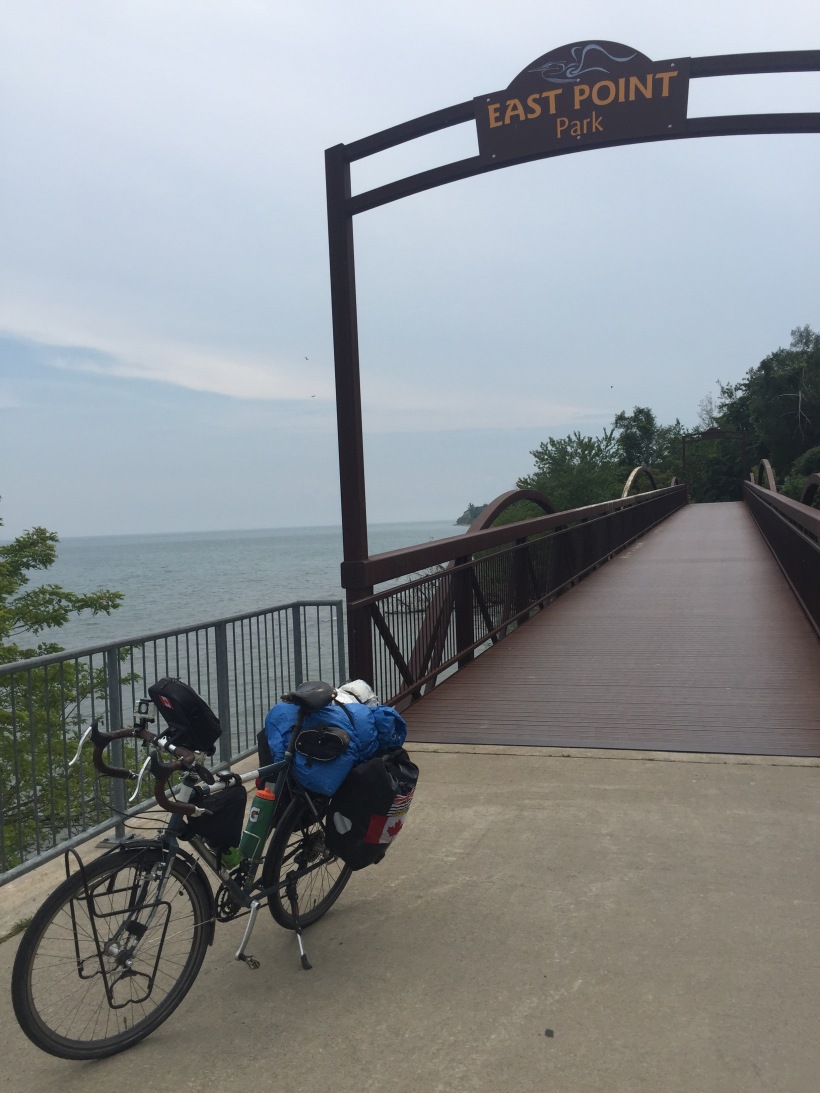 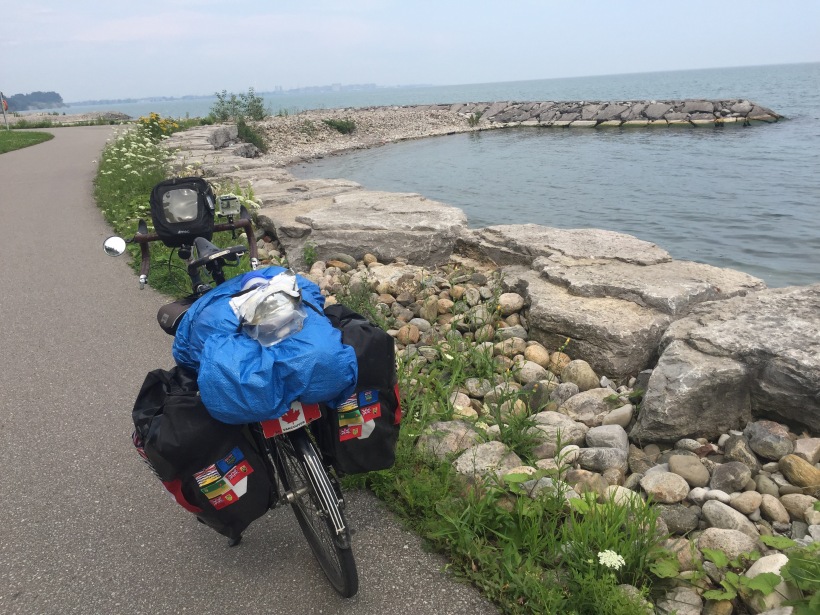 In Port Hope Friday morning I experienced an all-time first: my chain snapped during riding! While I fiddled with my broken chain, magic link, and chain tool, Local Cyclist Cathy pulled over and offered to drive me to the bike shop in Cobourg. With my next hosts at the ready and nasty thunderstorms waiting to pounce, I took her up on it. The bike shop was great, putting on a new chain and pointing me back to the road immediately!


Cousin Once Removed Audrie and Husband Mike met me on the edge of Prince Edward County Friday afternoon so Mike could cycle with me to their home near Picton. We enjoyed an almost exclusively flat ride across the island that is Prince Edward County – not to be confused with Prince Edward Island… Sometimes I question our nation’s ability to come up with new names.
Saturday I took another rest day, mostly occupied by a hike in Frontenac Park with Audrie and Mike.
Sunday I set out, zigzagging in the general direction of Ottawa and finding the Cataraqui Trail.

The “Cat Trail” is a 102km stretch of the Trans Canada Trail, and formerly part of the Canadian National railway line. Its fine gravel, dirt trail, and grassy sections are very full of nature.

Harmless garter snakes and tiny frogs darting across my path were a regular occurrence. The constant humming was not from traffic as I’d become so accustomed to, but birds and crickets. I saw a beaver and four separate herons, one of which was right on the trail before hearing me and flying away.

I’d forgotten the feeling of pure peacefulness that emerges from such terrain, having hardly immersed myself so deep in nature since riding on other rail trails through BC.

Soon enough I was approaching the capital, preparing to return to city socializing.

Monday night I stayed with University Friend Eric, enjoying some solid burgers and fries (surprised?) and milkshakes and waking around by the Rideau Canal.

Eric and I also caught part of the “Northern Lights” show – not to be confused with the Aurora Borealis Northern Lights – which runs nightly at 9:30 on the parliament building.

Tuesday I met Cousin Philip, fresh off the plane from Vancouver. We walked around the parliament hill area, taking in various buildings and monuments before entering the Canadian War Museum. 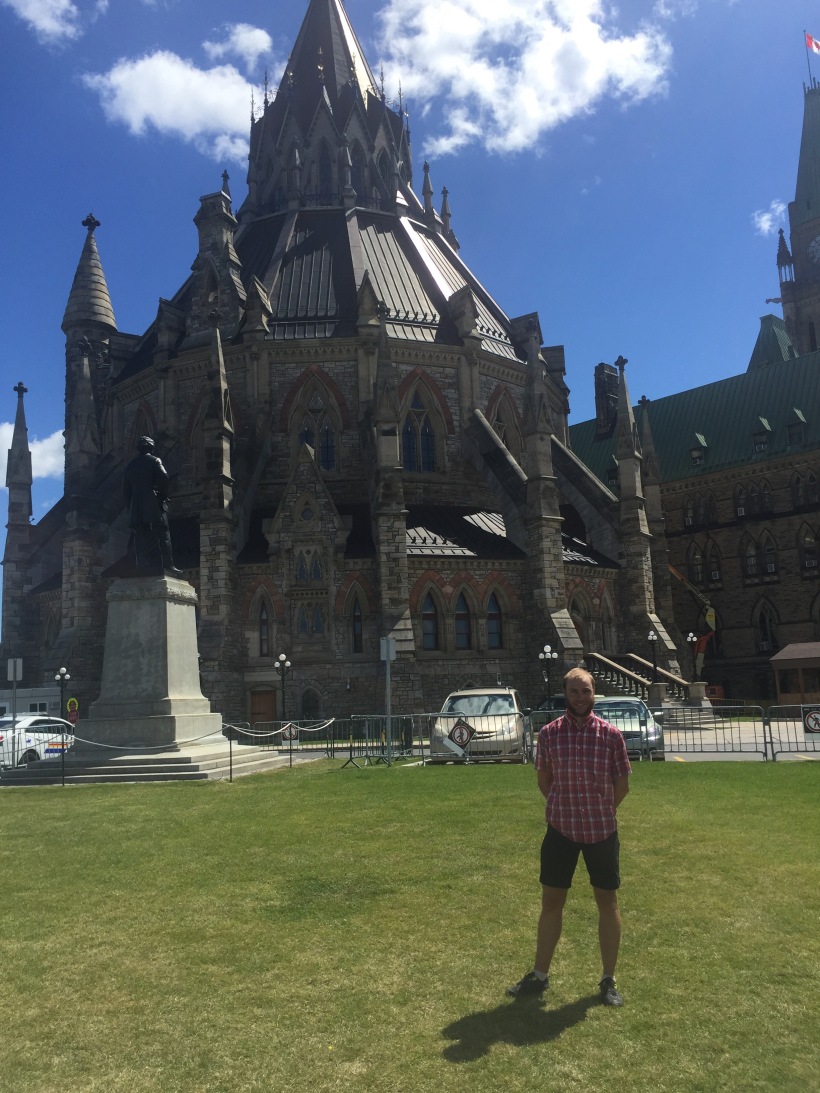 I’m finally almost through Ontario, where I’ve been for over a month! I’ve experienced everything here I’d hoped for: Spectacular Great Lakes, interesting Canadian Shield terrain, and connecting and reconnecting with loved ones.

Now, to brush up on my French a bit, at least enough to order smoked meat and poutine…
Strava: